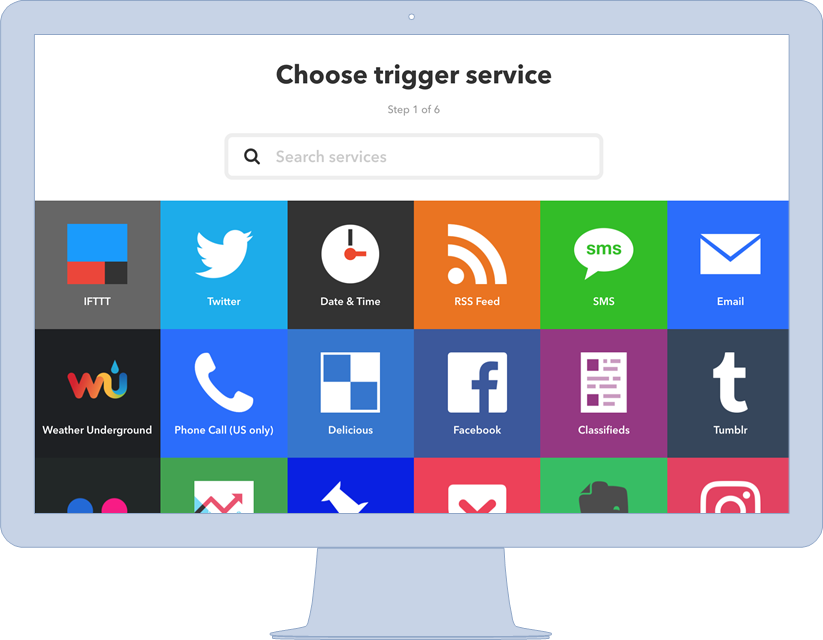 In the contemporary Internet of Things (IoT) era, people can interact with a multitude of smart devices, always connected to the Internet, in the majority of today’s environments. With lamps, thermostats, and many other appliances that can be remotely controlled, homes and workplaces are becoming “smart.” Furthermore, by using PCs and smartphones, users can access a variety of online services, ranging from social networks to news and messaging apps. The result is a complex network of connected entities, be they physical devices or virtual services, that can communicate with each other, with humans, and with the environment. This complex scenario opens up, at the same time, possibilities and issues. By taking advantage of End-User Development (EUD) solutions, users can actively participate in the IoT by personalizing the functionality of their connected entities.

Nowadays, in particular, many different visual programming platforms such as IFTTT and Zapier allow the personalization of the joint behaviors of connected entities through IFTHEN rules, i.e., in the form of “if something happens on a device or a service, then execute an action on another device or service.” The growing spread of new smart devices and online services, however, makes this personaliziation a complex task, especially for users without programming experience. The trigger-action programming paradigm, indeed, is typically implemented at a low-level of abstraction, with representation models that strongly depend on the exploited technologies. This negatively influences the rule definition process: end users experience difficulties in finding and managing the functionality they are interested in, and they are likely to introduce dangerous run-time errors in the defined IF-THEN rules.

Stemming from these issues, my research in the EUD context aims at assisting end users in easily and efficiently personalizing the functionality of their connected entities. Together with my research group, I explored different approaches and practical solutions to simplify the definition of IF-THEN rules, promote the discovery of new rules and related functionality, and enable the debugging of run-time problems in IF-THEN rules.

All these research works have been included in my PhD thesis. Click here to watch the full video of my PhD defense! 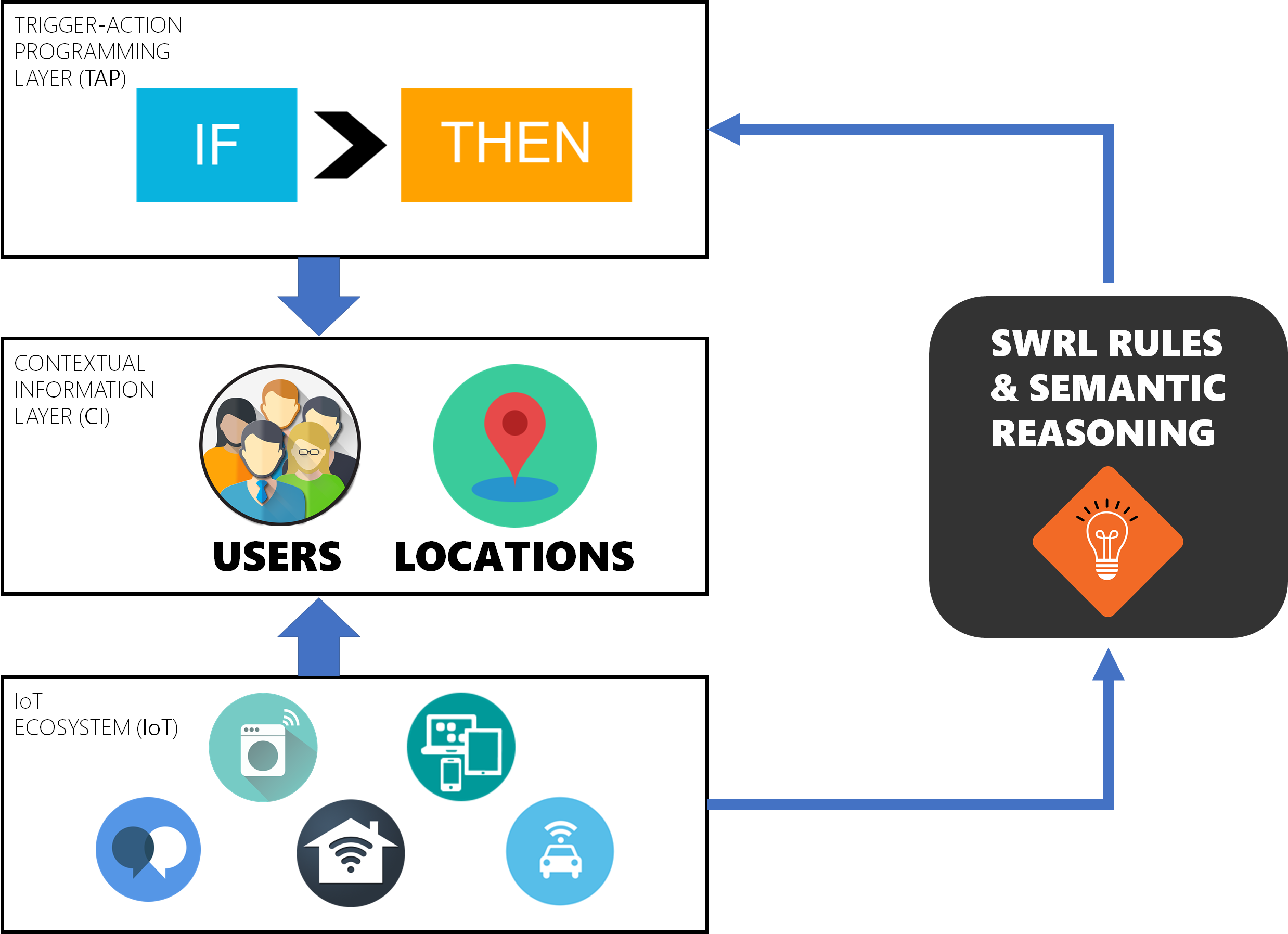 To simplify the definition of IF-THEN rules, we explored the adoption of semantic-based technologies. Our EUPont ontolgy, in particular, is a high-level representation for end-user development that allows the definition of abstract and technology-independent IF-THEN rules that can be adapted to different contextual situations, independently of manufacturers, brands, and other technical details. The aim is to simplify the processes needed by end users to define personalizations: by defining IF-THEN rules such as "if I enter a closed space, then cool the environment", users are not requested to specify technological details, and they can personalize the functionality of their connected entities with fewer rules, fewer mistakes, and in less time.

An instantiation of EUPont for IFTTT models all the 379 devices and services (100%) available on the popular platform as of March, 2017. We also manually mapped in the EUPont representation 951 IFTTT triggers out of a total of 976 (97.44%), and 528 actions out of the 551 (95.83%) available on IFTTT on the same date. Moreover, EUPont has been evaluated in terms of understandability, completeness, and usefulness, especially with user studies.

Check out the OWL ontology and the following papers for additional details! 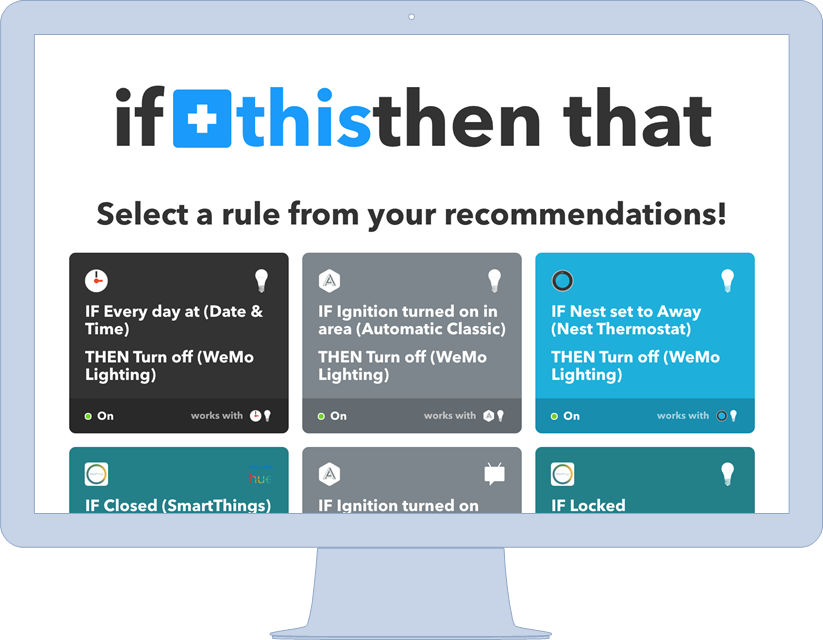 Besides envisioning a high-level definition of IoT personalizations, we also explored how to use the EUPont model to help users discover proper "low-level" triggers, actions, and rules without requiring any radical change in the adopted representation model. To overcome the information overload issue that characterize contemporary platforms like IFTTT and Zapier, in particular, we explored different approaches and techniques, ranging from optimisation methods and recommendation algorithms to conversational methods. The following are the main outcomes of such an exploration.

EUDoptimizer
EUDoptimizer is an optimization tool that dynamically redesign layouts in trigger-action programming interfaces in an interactive way, i.e., by considering the choices made by end users during the rule definition process. The aim is to promote the discovery of the "right" connected entity to be used for defining the trigger or the action, according to the current user need.
RecRules
RecRules is a hybrid and semantic recommendation system of IF-THEN rules. Its aim is to allow users to discover new rules on the basis of the underlying functionality, rather than the involved brands or manufacturers. A rule for turning on a Philips Hue lamp, for example, is functionally similar to a rule for opening the Hunter Douglas blinds, because they share a common final goal, i.e., to light up a place.
TAPrec
TAPrec is an End-User Development platform that supports the composition of trigger-action rules with dynamic recommendations. By exploiting RecRules, TAPrec suggests, at composition time, either a) new rules to be used or b) actions for autocompleting a rule. Recommendations, in particular, are computed to follow the user’s high-level intention, i.e., by focusing on the rules’ final purpose rather than on low-level details like manufacturers and brands.
HeyTAP
HeyTAP is a conversational and semantic-powered triggeraction programming platform able to map abstract users’ needs to executable IF-THEN rules. By interacting with a conversational agent, the user communicates her personalization intentions and preferences. User’s inputs, along with contextual and semantic information related to the available connected entities, are then used to recommend a set of IF-THEN rules that satisfies the user’s needs.
HeyTAP2
HeyTAP2 is a semantic Conversational Search and Recommendation (CSR) system that extends HeyTAP by applying a smarter recommendation algorithm and a navigation-by-preference approach. By exploiting a conversational agent, the user can communicate her current personalization intention by specifying a set of functionality at a high level, e.g., to decrease the temperature of a room when she left it. Stemming from this input, HeyTAP2 implements a semantic recommendation process that takes into account a) the current user’s intention, b) the connected entities owned by the user, and c) the user's long-term preferences revealed by her profile. If not satisfied with the suggestions, the user can converse with the system to provide further feedback, i.e., a short-term preference, thus allowing HeyTAP2 to provide refined recommendations that better align with the her original intention.

Check out the RecRules algorithm, the HeyTAP2 algorithm, and the following papers for additional details! 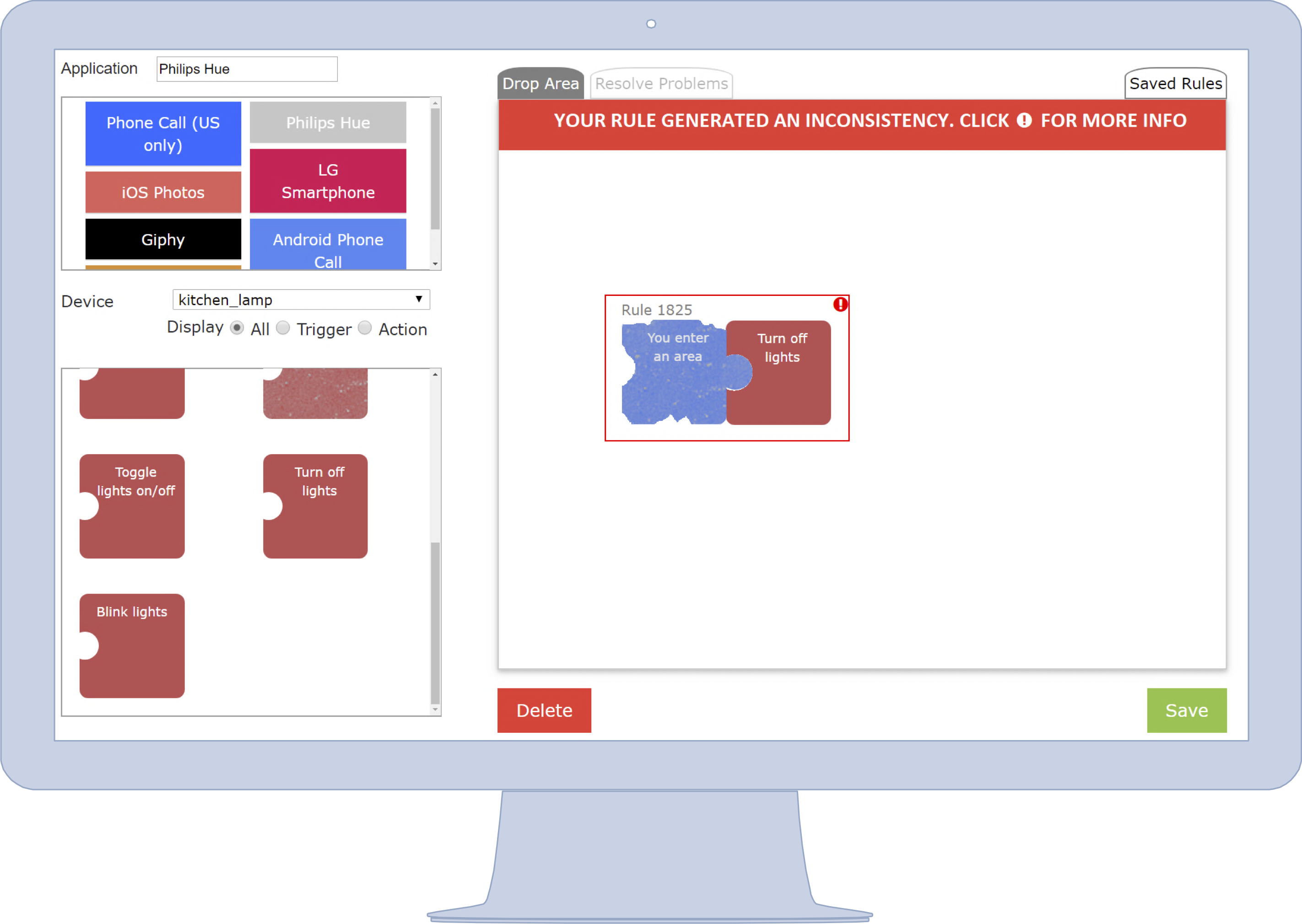 EUDebug
EUDebug is an end-user debugging tool built on top of an IFTTT-like interface that enables end users to debug their IF-THEN rules at composition time. It assists users in identifying rule conflicts, and it allows them to foresee the runtime behavior of their rules through step-by-step simulation. To model and check the run-time behavior of IF-THEN rules, we defined a novel formalism, named SCPN, based on Petri Nets and the EUPont model. With the help of EUDebug, users can successfully face computer-related concepts such as loops, inconsistencies, and redundancies. The step-by-step simulation, in particular, helps users understand why their rules might generate a specific problem.
My IoT Puzzle
My IoT Puzzle is an end-user debugging tool to compose and debug IF-THEN rules based on the Jigsaw metaphor. As EUDebug, it exploits the SCPN formalism, and it is based on a set of design guidelines extracted from the literature. My IoT Puzzle represents triggers and actions as complementary puzzle pieces, and it provides users with different real-time feedback, textual and graphical explanations, by following established theories such as the interrogative debugging paradigm. The usage of different representations and visual languages facilitates users in analyzing problems and helps them understand, identify, and correct errors in IF-THEN rules.

Check out the following papers for additional details!